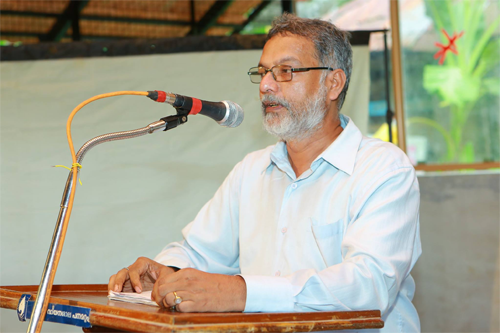 A.J.Thomas is an Indian poet writing in English and an acclaimed translator of poetry, fiction, drama and non-fiction prose from Malayalam He was the editor of Indian Literature, the bi-monthly English journal of the Sahitya Akademi till 2010.

Thomas was influenced by his mother’s love for nature and inclination towards poetry in his childhood. He spent two years in Bandel, West Bengal, when he began to write in English.

He came in contact with internationally famous writers like Dominique Lapierre, Sir Angus Wilson and Salman Rushdie and Indian writers like Pritish Nandy, M.T.Vasudevan Nair and others while working with the Kerala Tourism Development Corporation. His interaction with writers likeV.Sadasivan, Kadammanitta Ramakrishnan, Satchidanandan, E.V.Ramakrishnan, U.R.Ananthamurthy and R.Narendra Prasad shaped his growth as a poet and translator.

Thomas won critical acclaim for his translation of the verse-fiction Ujjaini based on the life of Kalidasa by O.N.V.Kurup, the doyen of Malayalam poetry.