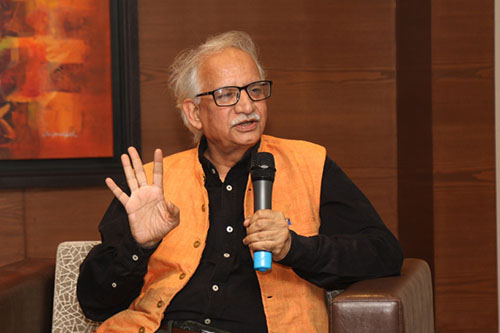 Arun Kamal is a leading Hindi poet and essayist based in Patna with six collections of poetry and three representative selections to his credit. He has also published two volumes of essays in literary criticism and a book of interviews. As a translator, he has brought out a selection of contemporary Indian poetry in English under the title Voices.

He has also translated Mayakovsky’s autobiography and poems and essays by Vietnam’s To Hu into Hindi.

A coumunist with the Nav Bharat Times, Prabhat Khabar, Sakal (Marathi) and Web Literature World (USA), Kamal has received several awards for his contribution to poetry including Sahitya Akademi Award for Naye Ilake Mein in 1998 and Bharatiya Bhasha Parishad Samagra Krititwa Samman in 2014. Poems and books of Kamal, who has been a teacher in English at the Patna University, have also been translated into a number of Indian and foreign languages.