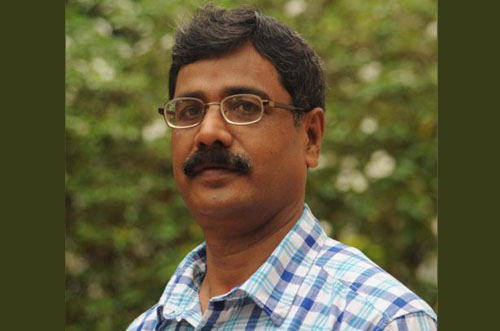 Asit Mohanty, a renowned Odia writer was born on 1st June 1958 in Puri (His native place being – Lekhanpur, Niali, Cuttack District) to Shri Artabandhu Mohanty & Bishnupriya Devi. Presently he is staying with his wife – Sasmita and two sons. He did his Post Graduation in Odia with specialisation in Modern Literature from Ravenshaw College in 1975.  During his stint of Post graduation in Ravenshaw College Cuttack, he started writing short stories and won various college awards and recognitions.Post his studies in 1979, his writing instinct was further honed and mindset influenced by the close companionship of an Odia litterateur and Sahitya Academy Awardee Shri Akhil Mohan Patnaik. The practice of writing turned to serious efforts by means of writing essays and features on Literature & Culture. Those articles got published in prominent periodicals like Jhankar, Samabesh, Konark, Esana & Srimandir etc.

He started his career in 1980 as Managing Editor of SAMABESH, the Odia monthly on Literature and continued. In 2007, he became the General Manager (Operations) of Eastern Media Limited, Bhubaneswar, subsequently as Editor – Eastern Media Limuted in 2010 and finally as Editor – PAURUSHA, the Odia monthly digest of Eastern Media Limited, Bhubaneswar. These assignments could not deter him from his writing skills that won him many laurels like Honorary Ph.D from Utkal Sanskruti Mahavidyalaya in 2018, Kendra Sahitya Academy Award (Translation) in 1998 for “Adhyaya Ekabinsha”, Odisha Sahitya Academy Award (Translation) in 2008 for “Bapu – Mo Maa”, Rangadhar Rath Foundation Award and many more.