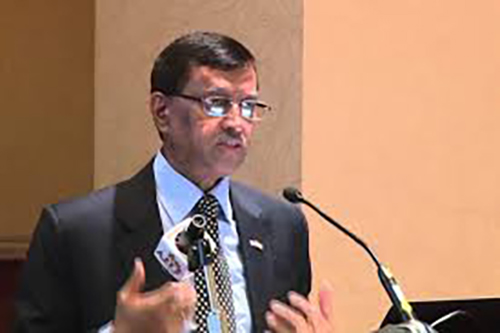 An Indian career diplomat, Dnyaneshwar Mulay is an acclaimed author and columnist. Hailing from a remote village in Maharashtra’s Kolhapur district, he had to struggle to study in his childhood but shone brightly when the opportunities came his way. He cleared the UPSC examination before being selected for the Indian Foreign Service.

Mulay, who served in various capacities in Japan, Russia, Mauritius and Syria, was instrumental in handling business relations between India and Russia and Japan. He also functioned as the Consul General of India in New York.

A regular contributor to a regular column to Loksatta in Marathi titled Badalte Vishwa-Badalta Bharat and to Sakal in a column known as Vishwachi Maze Ghar providing fresh perspectives and insights into various aspects of current global and national challenges and opportunities.

He also wrote a column in Marathi Sadhana Weekly titled Nokarshaiche Rang meaning the Colours of Bureaucratic Ink. The writings were subsequently published by Sadhana Weekly as a book which dwelt on the functioning of the bureaucracy in the Indian democracy.

Mulay also contributes to the literary page of The Hindu and The Dainik Bhaskar in Hindi.

A documentary titled Gypsy, highlighting the life and work of Mulay,  was produced by Director Dhananjay Bhawalekar which received the Special Jury Award at the Delhi Short Film Documentary Festival.