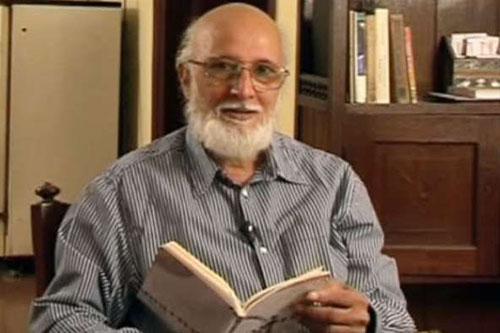 A poet, playwright, translator and academic, Sitanshu Yashaschandra Mehta is known for rich contribution to Indian literature which earned him the Saraswati Samman, Sahitya Akademi Award and Kabir Samman.

A recipient of the Padma Shri in 2006 for his literary achievements, Mehta is known for surrealism in his writings which is considered his signature style.

Mehta, who served as Vice-Chancellor of Saurashtra University, Rajkot, and also worked as chief editor of the Encyclopedia of Indian Literature published by the Sahitya Akademi, New Delhi, is known for his collections of poetry titled Odysseus nu Halesu (1974), Jatayu (1986) and Vakhar (2008) beside innumerable plays and criticism in English and Gujarati.

He wrote and adapted several plays many of which were staged. He adapted Eugene Lonesco’s The Lesson, Thomas Hardy’s story, Day After the Fair and Peter Shaffer’s Equus in Gujarati. He received the Ranjitram Suvarna Chandrak, the highest award in Gujarati literature in 1987.

Mehta had written the screenplay of 1993 Hindi film Maya Memsaab which was based on Gustave Flaubert’s Madam Bovary.