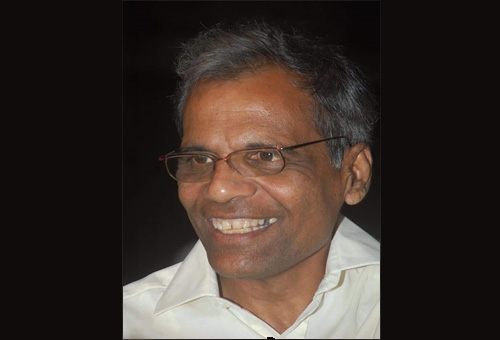 Udayan Vajpeyi is a Hindi poet, essayist, short-fiction and script writer. His works have been translated into English, French, Swedish, Polish, Bulgarian and many Indian languages. He has received various awards for his writing, including a Senior Fellowship from the Government of India (1994 – 96), the Krishna Baldev Award (2001) and the Raja Foundation Award (2003). Has published three collections of poems including Kuchh Vakya, four collections of short-stories including Ret Kinare ka Ghar, three books of essays, a book on tribal painting and folk tales, Jangarh Kalam & has re-created two plays, Uttarramcharitam and Abhijnan Shakuntam into Hindi for Sopanam (repertory of theatre directed by K.N. Panikkar) and has written a new play with Kavalam Narayan Panikkar. Has written a book each on theatre director Ratan Thiyam, Theatre of Grandeur and K.N. Panikkar, Theatre of Rasa. Works are translated in around 15 languages including French, Polish, English, Swedish, Odiya, Malayalam etc. Was writer-in-residence in Lavigny (Switzerland), Paris in 2003, and was fellow at Nantes (France). Has written texts for many documentary films including Kumar Shahani’s Bamboo flute and dialogues for Char Adhyaya (film based on Tagore’s novel of the same name) directed by Kumar Shahani.Teaches Physiology in Gandhi Medical College, Bhopal and edits a journal on Arts, Literature and Civilization, Samaas.